This is a common phrase used by many men to describe the type of woman they consider to be marriage material.  Women will also say they want a sensitive man that knows how to get a little rough when the moment calls for it.  In each of these scenarios, what’s being described is a person of balance.

This is an example of an Emotional suggestible and a Physical sexual. This is a woman who carries herself in a more conservative fashion while out in public but is unstoppable in the bedroom.  Most men will go for the quiet passive type for long-term relationship purposes but they’ll cheat on her with the ‘freak in the sheets’ type.  This is where the idea that men are never satisfied comes from.  No matter how much the main girl does at home it’s never enough. Why is this?  It’s because the very thing that makes her a conservative in public makes her conservative at home.  The Emotional sexual is not connected to their physical body the way the Physical sexual is.  She needs to be warmed up before jumping right into sex, this brings their feelings to the surface.  She’s normally not a risk taker and will chastise him for being too much of a risk taker.  The man becomes frustrated by her lack of sexual energy and the ‘I don’t do that type of thing’ attitude and will find someone else who will ‘do that type of thing’.  She finds out that he’s cheating, will not understand why and begins to blame herself for his actions or just tells him to get out and the

Now, none of this applies if you’re not in a serious relationship or marriage.  However, if you are looking to be with this person for the rest of your life, there will have to be some changes.  Just because you decide that since you’ve never done a particular thing that you never will doesn’t mean that your mate is going to say “Oh ok, then I don’t want to do it either”.  It’s just like squeezing a water balloon, the bubble will just pop up somewhere else.  So, aside from causing physical harm to yourself or going against your morals there should not be anything that you wouldn’t do for one another; especially if you’re married.  Imagine living the rest of your life not being able to get what you want from the person you love just because they don’t want to…not a good feeling.  If you’d like to bring scripture into this look up (Hebrews 13:4  “Marriage is honourable in all, and the bed undefiled”).  Chastity before marriage is great but chastity after marriage is a disaster.

There is more to this story such as the man that doesn’t want intimacy as much as the woman or how much is too much, but I’m trying to keep this as short as possible.  So the bottom line is, once you’ve found that special someone, go all out for them as they should be going all out for you.  This way they don’t even have the energy to see the freak in the streets. 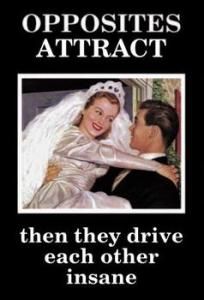 This of course is going to be about the Physical and Emotional characters.  Why do we use the term physical/emotional to describe these personalities?  The answer is that the Physical expresses his/her emotions physically whereas the Emotional withdraws into him/herself when they feel emotion. You may recognize these traits more so when a person experiences rejection. The physical will become more aggressive and come forward, but the emotional will become more passive and withdraw.  The physical (seemingly) thrives on confrontation and emotional avoids it at all costs.  The more the physical comes forward the more the emotional will withdraw.  So, to the physical, if you ever hear the emotional say during an argument, “Ok, fine.” That doesn’t mean that everything is fine.  That means watch your back. Although the emotional appears to have backed down and run away, this is not the case.  They will find a way to express themselves in a different place, at a later time.

Here’s how communication gets twisted in most conversations.  The Physical hears or learns by literal communication but speaks with an inferred language and at length.  Conversely, the Emotional hears/learns through inferred language but speaks literally and with very little words.  The trick here though is that you can be an emotional suggestible (how you learn) and a physical sexual (how you act).  This means that a person could come across as being quiet and shy until you get to know them and then you’re like, “What happened to that shy person I met?” This is incongruent behavior and it normally has unintended consequences.  In this case, the physical is attracted to what he thinks is an emotional only to find that he’s in a relationship with himself.  Or in the case where the emotional presents himself as outgoing and sociable only to get into the relationship and become the hermit that he truly is.

Where does this behavior come from?  Mostly from our parents but of course our environments play a major role as well.  If one parent is an extreme Physical, the other is likely an extreme Emotional…they’d have to be.  The child will pick up the extreme trait of both parents and shape it into some sort of blend of the two. If they learn to accept this as normal behavior they will replicate this in their own relationship and will never get why they don’t work.  There are options, either work on balancing your/their behavior or find someone who’s just as incongruent as you in the opposite behavior and somehow this stuff works out.

So the next time you get into an argument with someone step back and ask yourself, ” Am I being too Physical or too Emotional?” The key to effective communication is understanding how the OTHER person communicates. This only allows you to get your point across more effectively if that’s what you’re trying to do…
Till the next time,
T Scott

He never wants to go out

He goes out too much

He never compliments me

He’s a liar and a cheater

All he talks about is work

He doesn’t talk to me at all

He wants to do it too much

Also, read the earlier posts on the Physical vs. Emotional so this will make more sense.  I hope this helps a little. There’s no magic cure for any situation but taking this approach allows you more control of yourself (stress) and ultimately your situation.

Have you ever been in an argument with someone and it seemed that they just didn’t get it?  No matter how

many ways you’d try to explain your side it seemed that you were speaking two different languages.  Well guess what, you were.

This post is going to show you how to ‘win’ most arguments.  The key is to first be a good listener.  We all have modalities of communication that are unique to ourselves. They are visual, auditory and kinesthetic. Although we all use some form of each, there is one that you’re prone to use more commonly.

For example: My modality is auditory, that means that I add weight to every word that a person says.  I pay attention not to just what they say but how they say it.  I mostly don’t look into the eyes of the person I’m speaking with because for me the visual is a distraction.  I want to hear any changes in your tone and your choice of nouns verbs etc.  It’s been said that if a person doesn’t look you in the eyes when they’re communicating…they’re lying.  No, whoever said that was lying.  Try this one day: Go to or find on TV, a live performance by your favorite artist.  Listen to them with your eyes open, then with them closed. You will notice a distinct difference in the two.  A person that uses the auditory modality will use phrases like, ” Do you hear me?” “Listen to me!” “Talk to you later.”  They tend to have what’s called the phone head…that’s when they lean their head to the side as if to say I’m really listening.

The person that uses the visual modality will speak in visual terms. “Do you see what I’m saying?”  “See you later.” or “Look, I’m trying to show you something.  You will also find that they’re normally looking skyward as if they’re seeing a movie in their mind….they are. They will describe their point by ‘painting a picture’ for you to see what they’re saying.

The last of these modalities is the kinesthetic.  This modality likes to touch. They don’t feel like you’ve gotten their point unless they’ve touched you in some way. They will use phrases like: “Do you feel me?”  Let’s touch basis later.” or “You’re not in touch with reality.”  Elaine from Seinfeld is a very good example of this modality.

When you have two people speaking in different modalities, it can be hard for them to truly understand each other because they’re speaking different languages.  The argument can only escalate from there and typically ends up with one calling the other names or worse; all due to not understanding the art of language.

So, next time you’re talking or listening to some else speak, pay attention the key words they use and use them back with them.  They’ll think you’re the best listener and sooo easy to talk to. Why? Because you’re …speaking their language.

That’s all for now.  Happy communicating.